Maria Sharapova was spotted grocery shopping in Los Angeles this week in her first public sighting since she announced she is pregnant.

The 35-year-old former tennis star announced in late April that she is expecting her first child with her British fiance Alexander Gilkes.

Steph Curry To Ink $1 Billion Lifetime Contract With Under Armour

When she was spotted this week she concealed her blossoming baby bump underneath a flowing blue and white gingham frock.

Maria, who has five Grand Slams to her name, warded off the California rays with a large pair of tortoiseshell butterfly sunglasses.

Sweeping her luxurious brown hair into a high ponytail, she accessorized with a cream handbag and rounded off the look with a summery pair of sandals.

She broke the news of her pregnancy on her 35th birthday, April 19, by posting a breathtaking Instagram snap in which she bared her bump on the beach.

‘Precious beginnings!!!’ exulted Maria, who retired from professional tennis in 2020. ‘Eating birthday cake for two has always been my specialty.’

Her latest outing came a few days after her sizzling fiance posted a set of artfully lit Instagram snaps where Maria showed off her growing belly.

Alexander, a businessman who has cofounded such companies as the online auction house Paddle8, uploaded the pictures for Mother’s Day.

He gushed over ‘soon-to-be super mother @mariasharapova , and the exciting new chapter that lies ahead. I can’t wait to meet our baby, witness the great mother you will be, and graduate from my course in obscure fruits and vegetables.’

She first took up with Alexander – an Old Etonian who is friends with Prince William – in 2018 and they got engaged just before Christmas 2020.

Early in March she fired up her social media to daringly reveal how devastated she was by her native Russia’s war on Ukraine.

‘With each day that goes by, I am more and more heartbroken and deeply saddened by the images and stories of families and children affected by this escalating crisis in Ukraine,’ wrote Maria, who was born in the Soviet Union.

‘I am donating to Save the Children’s crisis relief fund, an organization working tirelessly to provide food, water, and aid kits to support those in need.’ 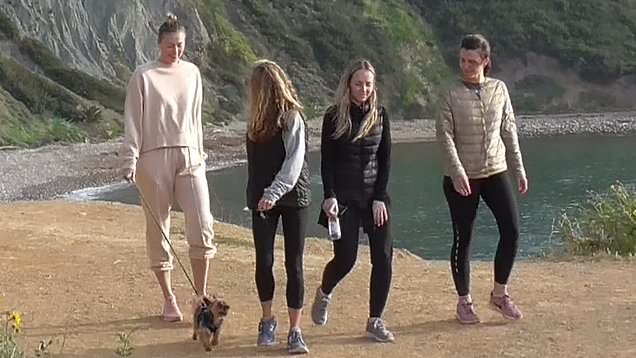 She urged her fans: ‘Please join me in making a donation. I pray for PEACE and send my love and support to all those affected.’

Maria found herself receiving blowback online for not using the word ‘war’ – this after Russia banned the use of the term ‘war’ to refer to what the government decreed must be called its ‘special military operation’ in Ukraine.

The Duma had by then also threatened a potential 15-year prison sentence for those who spread supposed misinformation that leads to ‘serious consequences.’

Although Maria has lived in America since 1994, when she was a child, she is still a Russian citizen and represented Russia during her tennis career.

Emilia Clarke: From Game Of Thrones To Marvel

Emilia Clarke: From Game Of Thrones To Marvel