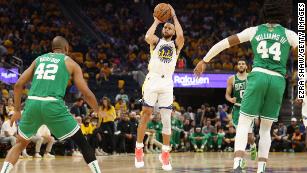 (CNN)The Golden State Warriors needed a big bounce-back performance on Sunday night. And they sure got it.

After a disappointing end to Game 1 of the NBA Finalsin which the Boston Celtics came back late to win, the Warriors ran away themselves in the second half of Game 2 to win 107-88.

Steph Curry led with way with 29 points, including 5-of-12 shooting from three-point range, with Jayson Tatum leading the Celtics with 28 points and six rebounds.

“Steph was breathtaking in that third quarter,” Kerr told the media post-game. “Not just the shot making but the defensive effort. He just doesn’t get enough credit for his level of conditioning, physicality and defense.

“People go at him to try to wear him down because they know how important he is to us offensively. And it is pretty dramatic, the difference in Steph’s strength and physicality between now and when I first got here eight years ago.

“The guy is amazing; he just keeps working.” 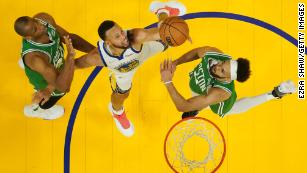 Curry shoots during the first half against the Celtics.

With a baying Chase Center wanting a strong showing in response to a difficult end to Game 1, the first half was a nail-biter.

The Warriors lead the Celtics 52-50 at halftime, with both teams’ stifling defenses proving resolute and keeping each other in check.

But as has become customary for Golden State this season, an explosive third quarter was the catalyst they needed.

The home team blew up just after the break, transforming their two-point halftime advantage into a 23-point lead.

And just minutes into the fourth quarter, with the result looking set, both teams pulled their starters, allowing the benches to play out the final minutes.

For the trio of Curry, Klay Thompson and Draymond Green — who have been vital cogs in the Warriors’ three title wins in recent years — it was an 18th career Finals win. 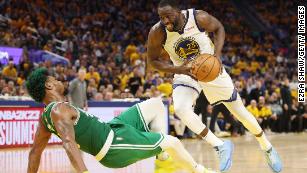 Green drives against Marcus Smart during the third quarter.

However, for the Celtics, it was an uncharacteristic end to Game 2 after finishing Game 1 so strongly and starting Sunday night so competitively.

issue. The team lost the ball 19 times, leading to 33 points for the Dubs.

“For us, that was a little disappointing,” Celtics head coach Ime Udoka said when asked about the turnovers.

“That’s kind of been a constant theme in the playoffs. When that happens, we’re in trouble.”

The teams will travel to Boston to play Game 3 on Wednesday.

‘This Place Is Horrible’: Patrick Mahomes’ Wife Brittany Matthews Recounted Getting Harassed By Patriots Fans Alongside Jackson Mahomes at Foxborough

Serena Williams, 40, Flaunts Her Next Level Legs In A Balmain Skirt While Attending Paris Fashion Week