Lewis Hamilton may not have had it his own way so far this season, but Emerson Fittipaldi believes things will change this weekend at the Azerbaijan Grand Prix. Hamilton already trails championship leader Max Verstappen by 75 points after just seven races.

But even more worrying for Hamilton has been his record against Mercedes team-mate George Russell. With Valtteri Bottas, Hamilton was rarely beaten throughout their time together at Mercedes.

However, Hamilton has beaten Russell just once this season and that came in the opening Grand Prix of the year in Bahrain. The seven-time world champion has had his fair share of bad luck due to safety car periods and differing strategies.

But there has been small improvements since the Spanish Grand Prix with both Mercedes cars starting to show good pace against Ferrari and Red Bull. The tight streets around Monaco proved troublesome with neither Russell or Hamilton able to gain much ground. 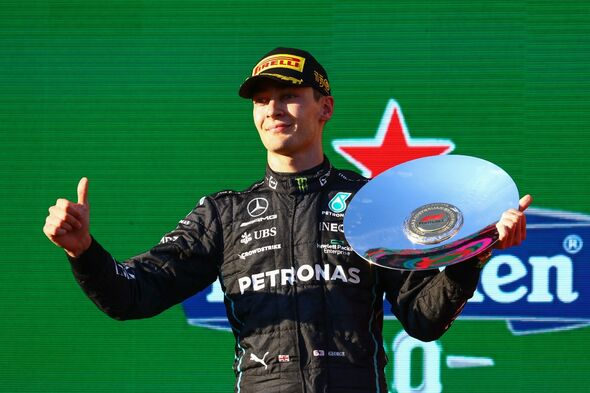 George Russell has impressed so far at Mercedes (Image: GETTY)

Mercedes: What’s gone wrong at the F1 and can they recover?

The Azerbaijan Grand Prix may present similar issues with drivers racing around the streets of Baku. But Fittipaldi believes the Mercedes pair will be ones to watch this weekend and the two-time F1 champion has tipped Hamilton to “come back strong”.

“George Russell is definitely going to do well (in Baku),” he told VegasInsider. “Mercedes is improving quite a lot.

“Lewis Hamilton’s car has been doing well for the last two Grands Prix, and I think he’ll continue to be stronger and come back strong in Baku. It will be great to see George Russell challenge Lewis Hamilton throughout the whole year. All the racing fans are watching that closely.

“Lewis is going to come strong now. It will be great to see.”

Hamilton will be hoping to avoid a repeat of last season’s race in Azerbaijan when he missed out on a chance to win the race. The British racing superstar lined up on the restart in second with just one final lap remaining after Max Verstappen’s tyre blowout brought out a red flag.

Hamilton attempted to make a move inside Sergio Perez into the first corner, but chose the wrong brake mode and drove off into the escape road before finishing the race in 15th.

Top 10 most beautiful pictures of Serena Williams on IG