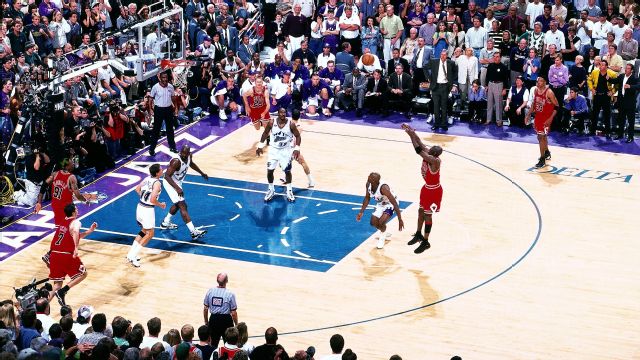 On June 14, 1998, Michael Jordan sank his last shot as a Bull to give Chicago a Game 6 win over Utah for a sixth NBA championship.

A rare Michael Jordan rookie card sold with auction house Christie’s for $1.008 million, including fees and premiums — a record for the 1986-87 Fleer Jordan that set the sports card industry aflame in the wake of “The Last Dance.”

This card, numbered 21 of 23, was graded an overall 8.5 from Beckett Grading Services, with a 9 autograph grade. (Both are out of a maximum 10.) Of the 23 that were released, only 14 are known and graded, held in private collections. It’s assumed that the remaining nine were never pulled — which explains why an unopened box sold for $5,000 on eBay in early April.

Also in the Jordan-specific Christie’s auction, called Six Rings: Legacy of the GOAT, were a number of player-exclusive, game-worn and signed Jordan sneakers. One pair stands out: Game-worn, signed Air Jordan Low XIIIs, which Jordan wore in the first two quarters of Game 5 of the 1998 NBA Finals — his last season as a Bull, as well as his sixth and final title where he won his unprecedented sixth NBA Finals MVP.

The Air Jordan Low XIIIs sold for $378,000. Jordan game-worn sneakers have had quite a year; last October, a pair of Nike Air Ships Jordan worn in his rookie season sold for $1.472 million, breaking a record for most expensive game-worn footwear of all time.

Today happens to be the 24th anniversary of Jordan’s championship-clinching shot over the Utah Jazz’s Bryon Russell.