LEWIS HAMILTON secured his fourth podium of the season at the Austrian Grand Prix as Mercedes bounced back after a bad start to the weekend.

Lewis Hamilton has warned Mercedes are “slowly eating into” Red Bull and Ferrari as he praised the team for a “great recovery” in Austria. Hamilton’s weekend got off to a bad start on Friday after he crashed in Q3, minutes before team-mate George Russell also lost control.

However, the team took advantage of Carlos Sainz’s mechanical failure and Sergio Perez’s early retirement to claim another podium in Spielberg. When asked if he felt third was a good result for the Mercedes driver, Hamilton simply replied: “Definitely.”

“I don’t know what they did with those bits that I desired but hopefully we have some new benefits to come after that. This is a  great recovery for us as a team to get a third and a fourth. It’s really great points, We’ve just got to keep our heads down and keep chipping away. We are slowly eating into the guys ahead but they are still pretty quick.”

Hamilton’s race engineer Marcus Dudley claimed the seven-time champion was on course for the top-three after his qualifying crash on Friday. But, the team appeared to struggle for pace in yesterday’s sprint race with Russell unable to get on terms with Max Verastappen and the two Ferrari’s in front.

Hamilton looked a bit more competitive today and at one stage Red Bull appeared to adjust their strategy to defend against the fast-charging Mercedes. The multiple champion lost time after a slow pit-stop but was able to hold onto fourth.

He was promoted onto the podum after Sainz’s car burst into flames in the closing stages after another mechanical issue for Ferrari. Hamilton admitted his car “didn’t feel the same” after his crash on Friday meaning the Silver Arrows could have possibly ended up closer to the two leaders. 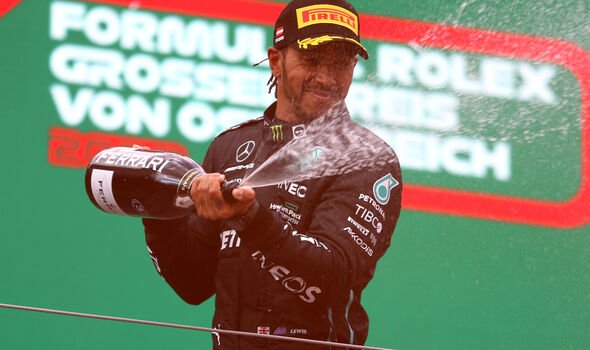 He added: “Every now and then our qualifying pace looked like we could have been in the top three and obviously with the crash that wasn’t possible. Then we had a completely new car, a new chassis, the same engine but a new gearbox, I think.

“The car didn’t feel exactly the same as what I had on Friday, but it was very, very close and it seemed to get better as I got more dialled in with it.”