Seven-time World Champion Lewis Hamilton was not allowed entry into the Paris Fashion Show along with a famous American singer.

Hamilton is one of the greatest F1 drivers of all time. He has won seven World Titles and is the driver with the most number of race wins, pole positions, and fastest laps.

Outside of F1, he has huge involvement in the fashion industry. He has repeatedly stated just how much he loves fashion and is often seen attending some of the biggest and most prestigious fashion shows in the world.

Every single race weekend, Hamilton arrives to the paddock wearing something glamorous that makes him stand out from the rest. On top of that, some of the biggest designers and clothing apparels in the world sponsor him. However, even the best sometimes have embarassing moments they deal with.

One such incident for Hamilton happened back in 2015, when he tried to attend a party at the Paris Fashion Show.

Back in 2015, Hamilton was only a two time World Champion. However, his interest in fashion and his global popularity was still immense.

Hamilton arrived to McCartney’s party in Paris. Unfortunately for him, he arrived late which is funny because he is someone who became popular for arriving first at his destination. 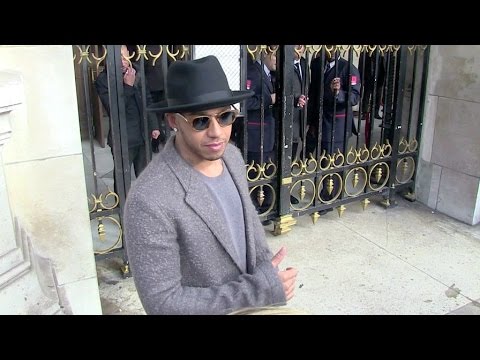 The Mercedes superstar was not alone. He had eight-time Grammy nominated artist Janelle Monae alongside him, and both them were denied entry and it was an awkward moment for all involved.

In spite of the roadblock he faced, Hamilton was ultimately allowed entry into the event along with Monae.

Hamilton explains why he does not like driving normal road cars

Hamilton, who is one of the best to ever drive an F1 cars, finds driving on normal roads very stressful. It is surprising that someone of his caliber would feel that way about driving road cars.

In an interview with Vanity Fair, he explained why driving on roads makes him feel stressed out. He feels that the city roads are uncertain, and a lot of unpredictable things could happen while he’s driving around.

I just think that I find it stressful,” he said. “I try not to do things that don’t add to my life. Look, we’re on these roads, anything can happen.”

I just think that I find it stressful,” he said. “I try not to do things that don’t add to my life. Look, we’re on these roads, anything can happen.”

Ayesha Curry and NBA star Stephen Curry celebrate their 11th wedding anniversary in a romantic getaway to France: ‘I feel so grateful’

Ayesha Curry and NBA star Stephen Curry celebrate their 11th wedding anniversary in a romantic getaway to France: 'I feel so grateful'

“I can remember watching her practice the first day, I’ve never seen that intensity, I was just blown away” – Agent Max Eisenbud on Maria Sharapova

Roger Federer: ‘The tennis tour is my second family’